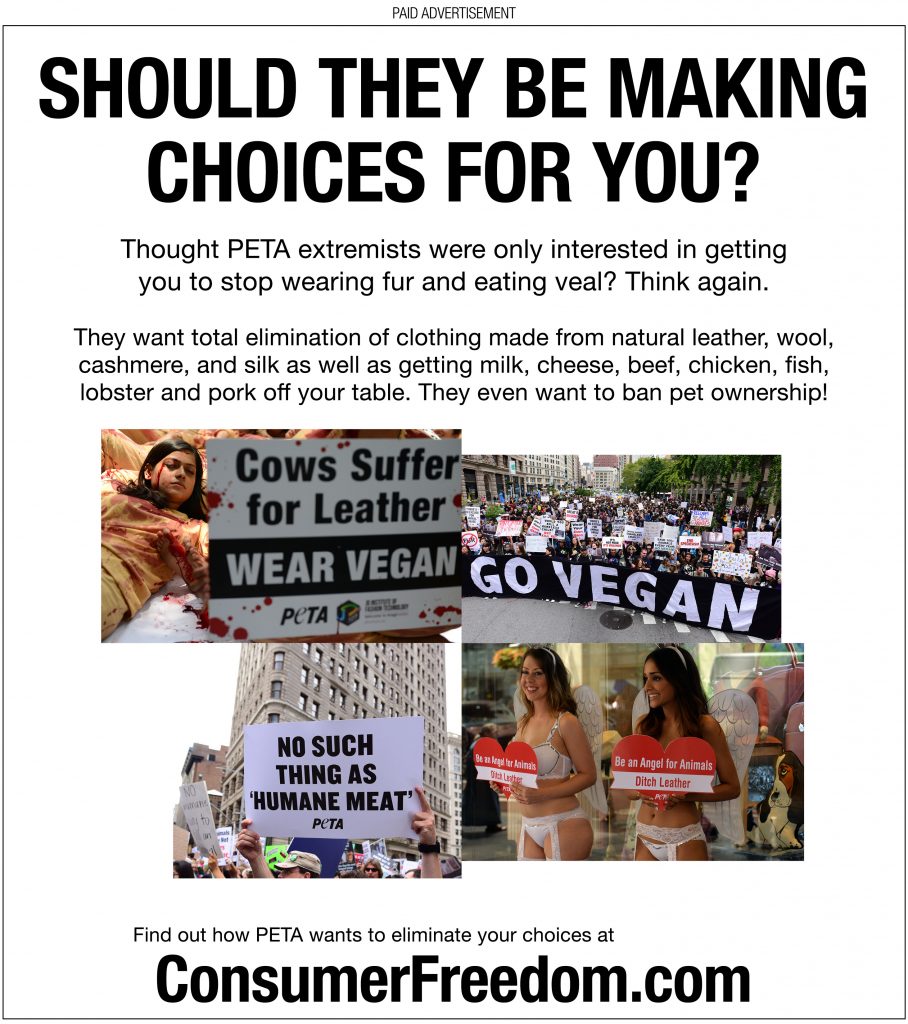 On Tuesday the Los Angeles City Council voted to advance a proposal to ban the sale and manufacture of fur garments in the city. The legislation follows a decades-long campaign from animal rights extremists such as PETA and the Humane Society of the United States to ban fur around the country. This move sets a terrible precedent for Americans, and we’ve placed a full-page ad making our opposition known.

Anti-fur activists are free to try to persuade others to be like them. But this bill is essentially legislating morality. And the religious zealotry of the animal rights movement does not stop at fur.

PETA, the Humane Society of the United States, and other animal rights groups are also against leather, wool, cashmere, silk, and any other clothing product that comes from an animal. They also want to stop Americans from enjoying meat, dairy, and eggs. They want to shut down zoos and aquariums. And they’re even against pet ownership, with PETA co-founder Ingrid Newkirk once calling it “an abysmal situation.”

Quite simply, these groups demand strict adherence to their vegan lifestyles. Anyone who doesn’t is a “sinner.” And to no surprise, they haven’t found many people willing to join their theocracy: Only around 1 percent of the country identifies as vegan, while the vast majority of Americans enjoy eating hamburgers and owning pets.

Animal rights activists argue that “no one has the right to abuse an animal.” And we’d agree in theory. Except that to animal rights extremists, any “use” of an animal is “abuse.”

We (and most Americans) believe that animal welfare must be protected. Animals used for food, clothing, etc. should be treated humanely. But animal products shouldn’t be banned because a tiny and noisy sliver of society doesn’t like it. You can’t have a free society if small groups can force others to their whim.

It’s ridiculous to see activists who got their start throwing red paint on people wearing fur coats now getting the time of day (and much more) in a legislative body. Any parent knows the power of “no” and the importance of not giving a tantrum-throwing brat what he wants. Hopefully the LA City Council decides to be grown-ups and let adults make their own choices.