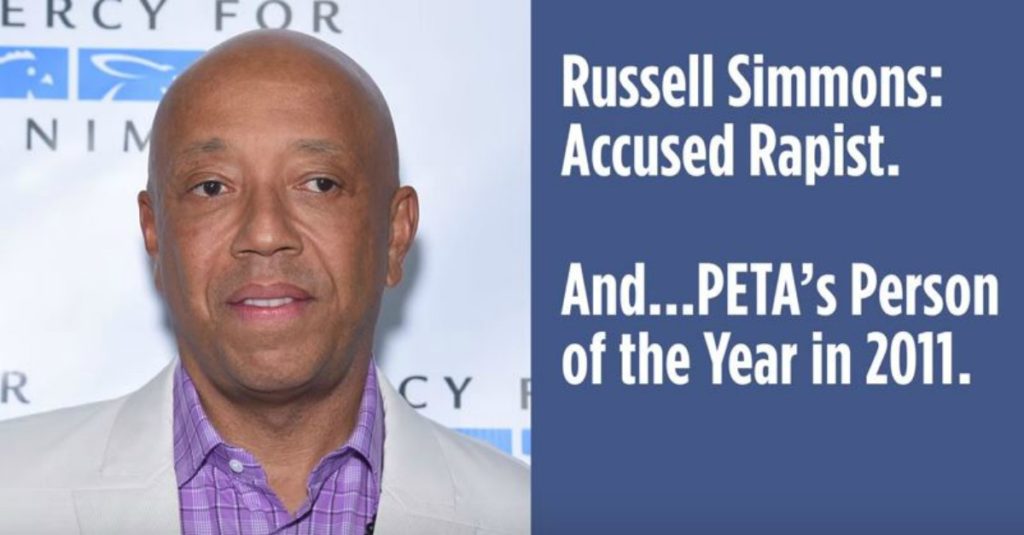 While PETA likes to make itself out as a moral voice in our society, several of its surrogates have been embroiled in a range of #MeToo allegations without rebuke from the organization. Most recently, PETA’s 2011 “Person of the Year,” Russell Simmons, has been accused of raping several women over the past three decades. Ironically, PETA often uses Russell Simmons as a good vegan role model and claims that vegans are less violent. Other PETA surrogates facing #MeToo scrutiny include Andy Dick, who was recently kicked off of a movie because of sexual harassment allegations, and Casey Affleck, who recently settled a sexual harassment lawsuit.

That’s why we put out this new video highlighting how several of PETA’s celebrity spokesmen have been embroiled in #MeToo allegations—while PETA still actively promotes them on its website.

Not long ago, a PETA campaign garnered serious criticism from women’s rights groups for treating abuse as a punchline. PETA’s “Boyfriend Went Vegan and Knocked the Bottom out of Me” campaign featured a video of a woman in a neck brace and no pants walking listlessly through the city. While she looks abused, the “twist” is that her boyfriend has an increased libido from veganism that’s injured her and left her in a daze. The campaign’s website is still online even after it received criticism from the Huffington Post.

And just last year, PETA ran a campaign comparing sexual assault victims to farming and compared women’s rights to chicken’s rights. And of course, there’s the long-standing objectification of women in the “I’d rather go naked than wear fur” campaign.

PETA’s normalization of sexualizing women has long been a feature, not a bug, of its campaigns. But in this season of women and men coming forward to tell their stories of sexual misconduct in Hollywood and beyond, it is time for PETA to disavow any bad conduct by its celeb spokesmen. It’s the ethical thing to do.

Posted In: Celebrities
PETA has killed tens of thousands of animals since 1998 and we're making sure the whole world knows. Have a tip or something else we should know? Get in touch on our contact page.