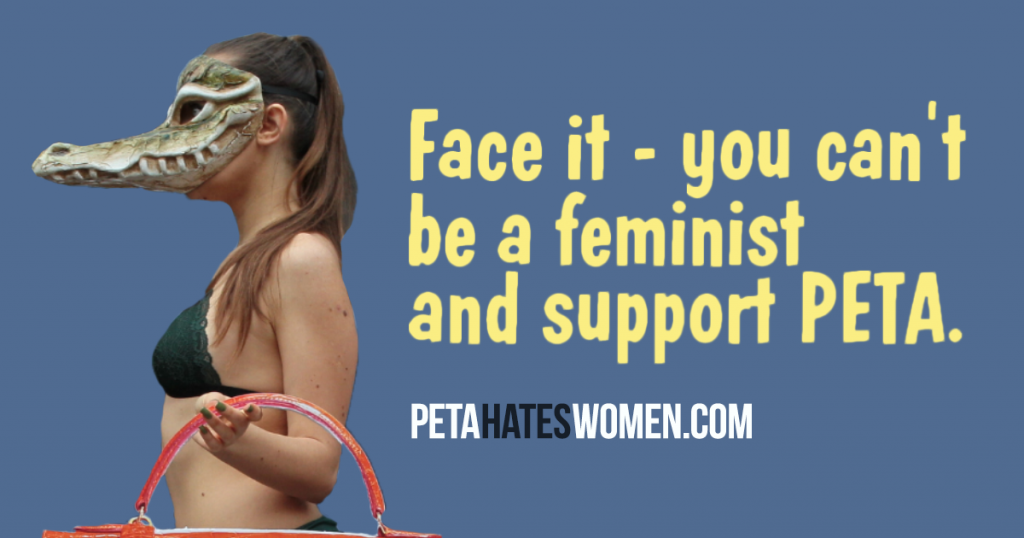 PETA recently launched a campaign claiming that women can’t call themselves feminists if they eat eggs. It’s another laughable stunt from PETA. But it gives rise to something serious and true: You can’t be a feminist and support PETA.

Why? Because PETA exploits women for its campaigns.

Whether it’s making light of sexual violence or simply objectifying women to get news coverage, PETA has a long history of demeaning women. “We are complete press sluts,” says PETA president and co-founder Ingrid Newkirk.

PETA Says to “Grab a P*ssy.” Following the outcry over then-candidate Donald Trump’s past remarks that famous men like him could take women and “grab ‘em by the p*ssy,” PETA put out an ad encouraging people to “Grab a P*ssy” and adopt a cat.

PETA Body-Shames Women. PETA put up a billboard saying: “Save the Whales—Lose the Blubber” with a picture of an overweight woman in a bikini. Clearly, the ad means to evoke the slur “whale” used to describe overweight women.

PETA Objectifies Women. PETA has used naked or half-naked women in scores of campaigns over the years. The most famous may be PETA’s use of naked bodies for its “I’d Rather Go Naked Than Wear Fur” campaign. But PETA’s street theater often features scantily clad women, some of whom wear lettuce bikinis. It’s ironic for a group that espouses veganism to treat women like a piece of meat.

PETA Doesn’t Believe Women Can Make Their Own Choices. PETA has thrown pie and flour on women for supporting fur, which PETA doesn’t like. More broadly, PETA would ban women (and men) from being allowed to wear fur, leather, silk, wool, cashmere, and anything else that comes from an animal.

PETA Compares Animal Rights to Women’s Rights. PETA makes ridiculous comparison between historical struggles for women’s rights and modern-day treatment of animals. Animals used in zoos or on farms have legal protections and are cared for by veterinarians. There’s no comparison to, for example, the systematic disenfranchisement of women. But given a PETA has also compared farms to Nazi concentration camps, it seems there’s no analogy no spurious for PETA to make.

It’s not just feminists who should be appalled by PETA. Mothers should, too. PETA is against having kids, with Ingrid Newkirk saying, “I am opposed to having children. Having a purebred human baby is like having a purebred dog; it is nothing but vanity, human vanity.”

Of course, PETA isn’t really a fan of men, either. In an in-depth profile of PETA for The New Yorker, writer Michael Specter recounted how PETA’s Newkirk isn’t a fan of people in general: “She told me, in the most unequivocal terms, that the world would be an infinitely better place without humans in it at all.”

Want to take action? Sign our petition against PETA here.