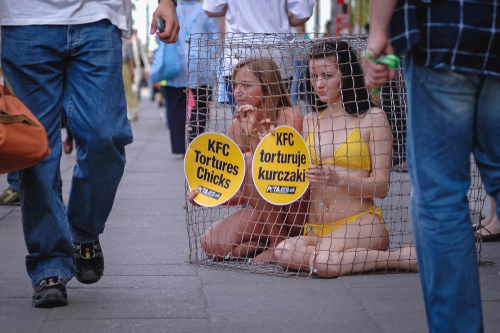 In the subtitle of recent interview of Ingrid Newkirk, The New Statesman asks an important question: “Has [PETA’s] founder gone too far?”

We certainly believe yes. Why else would we write hundreds of posts documenting the hypocrisies and atrocities PETA has committed in its nearly 40-year history?

But helpfully, Newkirk makes our case for us in this interview.

Even at 70, Newkirk continues to show complete disregard for the Holocaust and slavery and continues to compare these horrible events to zoos and farms. In the past PETA exhibits have even shown slaves next to animals and earned condemnation from groups like the NAACP.

“To animals all humans are Nazis. I’m ashamed of many humans,” she says. But not, apparently, of her fellow travelers at PETA, who kill close to 2,000 cats and dogs every year.

Newkirk reveals she sterilized herself at the age of 22 because she thought that humans were equivalent to Nazis. And after she dies, she plans on having her body mutilated to make a point.

She also does not seem to have mellowed from her past defense of extremism. “I wouldn’t mind razing a building if it was used as a terrible place to torture living beings,” she admits. Keep in mind that her definition of animal torture apparently encompasses zoos, aquariums, farms, and the local fish market.

Elsewhere, she says she doesn’t believe the blind should have guide dogs and that she’s against animal research on rats even if it led to a cure for AIDS. These positions—radical enough in  their own right—seem almost mellow compared to the other outlandish views she espouses.

It’s clear Newkirk has some serious self-hatred based in her membership to the human race. Over the years Newkirk has built an organization that will stop at nothing to push the vegan agenda. The self-described “press-slut” holds a tenacious grip on the steering wheel of the clown car that is PETA. The real question is: Can PETA survive Ingrid Newkirk?